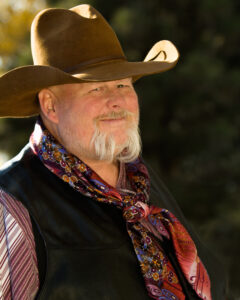 Roger Ringer was raised in rural Kansas and has loved every minute of it. Inspired by two high school history teachers the love of the unique history of Kansas has always been his first love. Through a lot of experiences the farmer, cowboy, businessman, firefighter/EMT, and much more, the life experiences came together to start Roger on a journey of discovering the almost lost people, places, and happenings in Kansas History.

Working at Old Cowtown Museum the art of telling the stories of Kansas was refined. Also venturing into Cowboy Poetry and Western Music all added to the love of telling a good story. People are amazed at things that happened near them or even in their own families.

In Roger’s family it was known that there was an uncle five generations back that was killed in the Indian Wars. It was through an organization called the COWBOY STORYTELLERS ASSOCIATION OF THE WESTERN PLAINS that it was learned that the unknown uncle was Major Joel Elliott second in command of the Seventh Cavalry under George Armstrong Custer. That Elliott had testified at Custer’s court martial and was in command of the Seventh Cavalry at the Medicine Lodge Peace Treaty. There he became good friends with peace chief Black Kettle of the Southern Cheyenne tribe. Little did he know that a year later he would be charging into Black Kettle’s camp on the Washita River. There after being ordered to pursue fleeing Indians would he, and 17 Troopers, run into Arapaho warriors. The group would be killed and abandoned by Custer as the rest of the Army units left for the safety of Camp Supply.

Joel Elliott’s brother which is the 5 generation grandfather of the author moved to the town of Peace Kansas, which later became Sterling. He would be a major banker in the community, donate the land for the cemetery, and set on the board of directors of Friends University in Wichita, KS.

Another grandfather rode his pony up the Chisholm Trail bringing the livestock to a new farm near Schulte, Kansas. Farming and teaching the author the trade. Others in the family told stories that intrigued the author about the life of the early days in Kansas.

Being retired from the fire department Roger worked many jobs and did many things over the years. Auctioneering was one of his favorites. The sorting through the items to be sold was just as much fun as the actual selling of them. The history of each piece was not lost on him.

With declining health the option of setting and feeling sorry for himself did not occur to Roger. Always involved in rural issues and rural development, he took the freelance writing that he had been doing for years and remembered all the stories that had been told to him over the years. These stories are in danger of being lost. The teaching of Kansas History in the schools is rudimentary and the interesting stories of the state are being lost with each generation. So the effort began to research these stories and start on a manuscript. When approached by Roger, Arcadia Publishing took interest in the project and samples were sent in. Referring the project to History Press KANSAS ODDITIES was born.

With the moral support and a forward by Marci Penner of the Kansas Sampler foundation, and an author herself, the book was an immediate success. Where does this go from here? Time will tell. In the meantime Roger continues his weekly blog that is picked up by many newspapers.

Roger lives in the Gypsum Hills north of Medicine Lodge, on a hill.